F- FOR FIVE THINGS ABOUT THE NUMBER FIVE 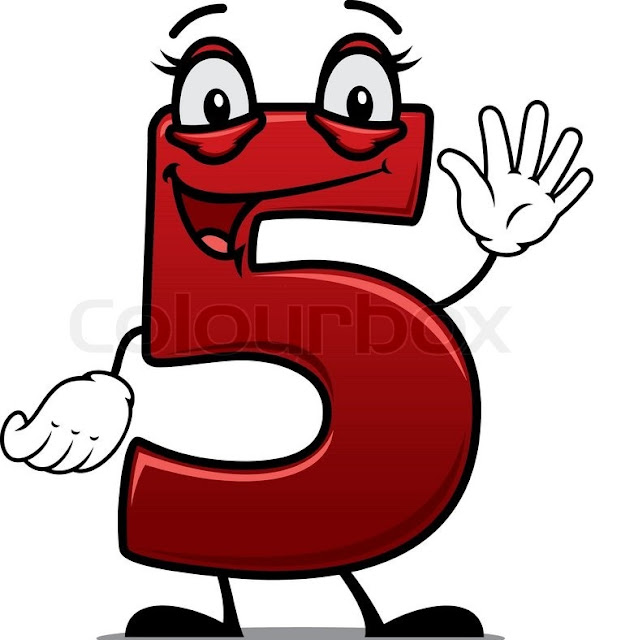 F- FOR FIVE THINGS ABOUT THE NUMBER FIVE
FYI….For Your Information, I am not a numerologist. However I have a lot of interests in many things. That’s why the THEME OF MY #BlogchatterA2Z #AtoZChallenge is MISHMASH- A Little Of Everything. Today is the SIXTH Day of this Challenge and the Alphabet of the day is F.
When I thought of F, The first thing that came to my mind was FIVE, I mean the Number 5.
There are so many things about the significance of the number 5. However here I am writing precisely about five of them. I must state here that this article is a researched one and some information i have taken from random reading on internet like googling and surfing wikipedias.
ONE- Five i.e. Number 5 is an angelic number, It’s the number of the harmony, balance and the divine grace. According to the Bible, it is the symbol of the Man-God by the five wounds of the Christ on cross (for this reason, it is also considered as the number of the grace). The number 5 in the Bible is also significant because his creation, the ‘man’ has five fingers, five senses and five toes. Thus it is the number of God’s grace. There are five great mysteries: Father, Son, Spirit, Creation and Redemption.

TWO - The number five holds tremendous significance in nearly all Buddhist traditions. It refers to the Five Colours, the Five Senses, the Five Wisdoms, the Five Buddha, and a host of other important philosophies. The number five is intimately associated with the Chinese theory of the Five Elements, a concept underpinning the Zodiac Calendar, the latter serving as the preeminent calendar of old-world Asia.

Indeed, China’s five-element theory is generally thought to predate Buddhism, but in later centuries its influence is dressed predominantly in Buddhist garb. There are dozens of concepts associated with the number five. (Note - The Source of this information is random reading on internet).

3- In Hinduism more precisely Hindu Culture, the Number Five has a great significance. There are names of the lord and religious rituals attached with it. Let me write some of them here
PACHANAN  or PANCHAMUKHI – Lord Shiva is believed to be a five faced god.Hence he is revered as Panchanan. Panchanan  or Panchmukhi  Shiva is an image of the idol Lord Shiva with FIVE faces. FIVE is the scared number of Lord Shiva so five mantras (verses) and five syllables represent him signifying his five heads that demonstrate his five aspects of his divine persona. His Mantra is also called Panchakshari  (Five Worded) mantra.

PANCHA MAHABHUTA - Five Great Elements
Pancha Bhoota or Pancha Maha-Bhoota in Sanskrit, five great elements, also five physical elements, is a group of five basic elements, which, according to Hinduism, is the basis of all cosmic creation. The five elements are fire, water, air, earth, and ether. These elements have different characteristics and these also account for different faculties of human experience. In ayurveda and Indian philosophy, the human body is considered to be made of these five elements.

PANCHAMI – The goddess Saraswati, goddess of knowledge and intellectual is associated with Panchami or number 5. Her day of worship is termed as Panchami or Sree Panchami -  The Fifth day  of the month of 'Magha'. Also   Vasant Panchami, also spelled Basant Panchami, is celebrated equally by Hindus, Muslims and Sikhs in various ways depending on the region, Vasant is primarily a cultural festival that marks the arrival of spring. The people of the Panjab wear yellow clothes and eat yellow rice to emulate the yellow mustard (sarson) flower fields, or play by flying kites. The Vasant Panchami also marks the start of preparation for Holika bonfire and Holi, which occurs forty days later

PANCHUKA – PANCHUKA is the last five days of Kartik month in Orissa and people abstain from all types of non-vegetarian food during the period.   Traditionally, staunch devotees of Lord Jagannath abstain from all type of non-vegetarian foods during the entire Kartik month which is regarded as Holiest Month of the months but those who are unable to follow it, observe it during the last five days of the month. The five-day period is also of great significance in . Thousands of people who are observing Kartik Brata for the entire month gets an opportunity to have darshan of Lord Jagannath in five different veshas or attire during the period.

FIVE PHASES - Manifestations of the Deity are expressed in five phases:
1. Source or Seed--The Ain Soph Aur or Adam Kadmon
2. Root --World of Emanation of Atziluth
3. Tree --World of Creation or Briah
4. Branch --World of Formation or Yetzirah
5. Fruit --World of Action or Assiah
These five phases form a schema of the Tree of Life
PANCHA-PATAKA [five worst acts] described in vedas
1. BRAHMA-HATYA: Killing of a Brahmana
2. SISU-HATYA: Abortion and killing of animals
3. SURA-PANA: Drinking liquor or alcohol
4. SVARNA-STEYA: Stealing
5. GURU-TALPA-GAMANA:  Illicit Sex / Sex with Guru's wife.
4 - Also there are PANCH Maha sagars, Five Oceans on the Earth. Five fingers make a fist. Five people make a PANCHAYAT.
5- The number 5 is the most dynamic and energetic of all the single-digit numbers. It is unpredictable, always in motion and constantly in need of change. It’s a number of positivity, resonates with the influences and attributes of personal freedom and progress.

DID I SAY MY BIRTH NUMBER IS ALSO NUMBER 5, That Is 14th Of November???????/
This is my Post for DAY – 6
For the Alphabet E In #ATozChallenge by #Blogchatter #BlogchatterA2Z
Posted by Tina Acharya at 6:55 AM