PK Controversy: Is the real message getting lost somewhere? 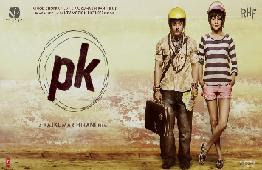 Believe me when I watched the movie PK I was not at all pre-occupied with any kind of thought.  There was no such intense hue and cry across the country as well that time. And I must say the sensational PK poster was never a driving force for me to watch the movie.

There were only two strong reasons I was driven by to watch this movie.  One, actor Aamir Khan…I hardly miss his movies especially since last few years.  The second one is the Producer and Director of the movie,   Rajkumar Hirani….one of my favorites in Bollywood! I love the ideas, creativity and messages besides the entertainment values of each and every movie of him….may it be Munnabhai MBBS oror 3 idiots…etc.   His movies are really a celebration for me to watch!!  Apart from being an amusing and entertaining film the message in PK is quite wonderful but given in a different way which is the hallmark of Hirani's movies.

PK does present a profound existential perspective of human amidst the complexities of reality on earth. In fact it was actually invoking the PK in each of us…. lost, bewildered and confused and despaired!
PK symbolizes all of us. We like PK - the alien - came to the earth from an unknown world, bare or undressed, unconditioned, innocent with a state of pure consciousness.
Our ego and body consciousness was absolutely non-existent at the time of our birth.
But as we grow older, we get programmed by our surroundings. In the process though we became smart, intelligent or a knowledgeable, which is essential to struggle for the survival on earth.  And like PK, we learn to cope, we learn to become diplomatic, and we learn to tell lies to hide our incompleteness.

In the process we lose the purity of our soul, the spotlessness of our psyche and the serenity of our essence. We lose the connection with our source, the source of divinity as we misplace the "remote that would link us with HIM" somewhere in our journey on earth.

Without connection to our source, we become stressed out, sad, and worthless. We live a life but against a backdrop of constant intellectual uneasiness with an unrelenting feeling that something is missing, some part of the jigsaw puzzle needed to complete the picture.

It is at such a point most of us turn to religion and spirituality. But just as the PK in the movie, we get caught with the questions that to get back our remote, which God should we to turn to?
Who is the real God out of the many gods we are provided with? Whom to believe, which religion to follow, whom to have faith in? We get surrounded by all such bafflement and confusions. As a result we fall prey in the hands of notorious   Middle-men in a hope to clear our doubt.

To find the God that made us, we do not necessarily need middle-men. In fact all these middle-men across all creed, religions and faith system are themselves lost creatures on the earth. How a blind will show you the right path. To connect with God we need to find the remote which can connect us with him. And that remote is not outside us, but it is deep within each one of us; it is our innermost core, our soul. We just need to open our inner eye, the eye of our intuition and wisdom, and look deep inside us. Our remote lies there only.

However I feel the above message in the movie is getting lost amidst the unnecessary controversies around it. I honestly feel there was little imbalance in the movie especially at the end where the protagonist questions only one belief system or the middle man of one so called religion despite finding loop wholes in every religion in the initial part of the movie.
After all you cannot speak the truth partially!

To point out few: I mean if you mean God is missing, you cannot use symbol of
God in one belief system. Or if you are talking about the trustfulness of one religion then you should talk about the tolerance of another and truthfulness of some other. I'm not cynical or critical but I'm quite practical as India is a land of plurality.

I don't believe Hirani or Needs cheap controversies for the business of their movie but at the same time I feel the movie could have given a better balance especially at the concluding part. PK may be a movie where a right and wonderful message is given in a little wrong way.

But it's OK.  If we really claim ourselves as the citizen of an ancient glorious land we should learn to accept our fault. Pointing out someone else's fault does make ours right! But violence and vandalism never justify anything.  It only shows the inherent insecurities. And the magnitude of controversy around PK, which is otherwise a wonderful movie is totally unjustified and height of hypocrisy.

PK is all about redirecting ourselves to our inner soul, as he says "Go, seek and trust that God who made you, not the God that you made." Let's keep it that way only!
No more violence and politics please!
Posted by Tina Acharya at 1:37 AM No comments:

SEAT BELTS SHOULD BE MADE MANDATORY FOR ALL!! 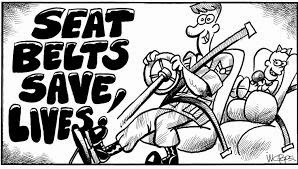 SEAT BELTS SHOULD BE MADE MANDATORY FOR ALL!!

While the entire Nation was yet to recover from the state of  totally gripped in grief and commiserations with the sudden demise of Union Rural Development Minister Gopinath Munde, a veteran leader of BJP in a road accident, it has given one more reason for us to ask hard questions on the terrible road safety conditions of our country and the kind of safety norms we take in general and our negligence.

The main reason behind the shocking casualty of Gopinath Munde was primarily a “shock or jolt” that resulted from the accident of his car with another vehicle. That was a totally freak, pointless and senseless accident on an early morning when the roads are totally traffic free in the heart of Delhi. Looking at the scratches and dents on both the vehicles, as reported by media, one can easily identify that they had merely brushed against each other.

But the sudden and stern "shock" resulted from such collision lead Mr. Munde to severe internal injuries in terms of vertebral fracture, ruthless liver lesion finally leading to a cardiac arrest that finally caused his death. He also suffered from a small head and nose injury which imply that he might have hit the interior of the car because of the sudden jolt.

That’s why many experts say had Mr. Munde been wearing a seat belt, he would have been escaped death and alive and survived the fatality with a very minimum damage.

Seat belt is basic equipment that helps the passengers from any sever damage as it stops the person to come out of his seat and hit other interiors of the car which is also called second impact in case of a mishap.

A seat belt has been called as a true life saver as it reduces around 50% of probability of serious injuries. But the serious irony among us is that, despite the risk of serious injuries, and facts that seat belts can be effective in saving the life of people sitting in the vehicle, we still neglect the use of seat belts while driving.

In big cities like Mumbai or Delhi at least people wear seat belt in the driving and front seat of a car but wearing it in the back seat is still a distant idea. In other places wearing seat belt in the first place is as remote as the area is.

So I think we must learn the lesson from such unwanted incident. We must make wearing seat belt mandatory for all the passengers in car irrespective of the seat they sit on. At least this basic step will prevent many people from losing their lives and survive with minimum injury.

However, I must say that India’s atrocious road safety conditions needs urgent and serious attention. Strong and stringent law and punitive punishment should be applied for the defaulters of over speed and drunk driving, usage of cell phone while driving and breaking traffic signals.

Our lives droop by a slender thread which can split any moment. In spite of the best of precautions taken by us, our destined time of departure is always an unknown entity. May be we are destined to die…but not untimely and seriously not because of our negligence and carelessness.

I appeal to everybody please adopt and share the following basic precautions while driving:

Please do not over speed

Please do not use mobile phones while driving

And say a strict no, no to drunk driving

And last but not the least, never ever forget to wear the seat belts irrespective of the seat you sit on. The makers of modern-cars have provided rear seat belts not without purpose. There is always the possibility of a hit from the rear or from the sides, which could lead to irreversible losses.

We must remember that a small negligence on our part would cost hugely with irreparable damage to not only our lives but other people also get affected by it.
Posted by Tina Acharya at 1:29 AM No comments: