The 3s of Television Commercials: Stupid, Smart and Sensible!!! 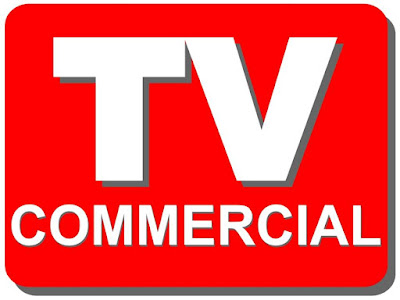 I always believe Television Advertisements are perhaps the most creative and effective form of mass media communication. The incredible imagination of storytelling within few seconds with matching visuals, taglines, jingles and punch lines perhaps the most powerful way of selling a product or a brand that makes Television Commercials most shot after  Not only just mere product selling but Television Commercials are the best way to teach people about the underlying social issues, changing thoughts and trends, innovative ways of looking at things, different perspectives and understanding the gaps between various strata of people. 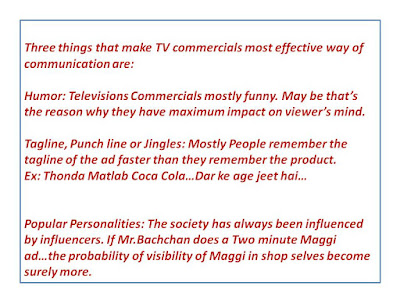 To be honest, though now days “break ke baad: that involves advertisements” between any program takes me to focus in other work and cores while watching TV but as a kid I was very fond of Ads. Getting little nostalgic I remember it was during the time of Epic serial, Ramayan (Ramanada Sagar “Sagar Arts”), 15 minutes prior to the beginning, there was only advertisements. Elders used to skip that 15 minutes while we kids were more excited to watch those ads. In fact I had even remembered all the taglines and sometime even the entire Ads.
However over the years Television Commercials has become a part of life. In fact sometime if a shopkeeper insists us about a product which is comparatively new, we suddenly try to remember the advertisement first. If we don’t remember or there is no ad for that product…I’m not sure how many of us will buy that product. Such is the clutch of Television Commercial in our psyches. We may shout why brands or companies spend crores of money on Advertisement Agencies, but the truth is without any advertisement, a product is less likely to be sold.
I feel…The entire concept of Television commercials mostly revolves around three parameters, STUPID, SMART AND SENSIBLE. The concept is either consists of one of them or a combination of any tow or all three.
Here are some examples:
“Fair & Lovely” Ad: This is one of the much talk about ads as the concept is often ridiculed as it says “your complexion is more important than your qualifications”….STUPD things!!
But the SENSIBLE part of it is it speaks volumes about how a woman is seen at first. There is saying: “When a man speaks, people hear first then see the speaker, but when a woman speaks, people see the speaker first then hear the speech”. We are by default little racist in nature. The commercial how stupid in its concept, but has a sensible thought in it as well.
Similarly there is an ad of tea brand, Tata Tea, which tells us to take some actions instead of sitting and just talking about corruption in our country with tag line "Jaago Re". The ad teaches us to be a responsible citizen…isn’t it Sensible??
Every detergent powder is awesome, except this ‘saadharan’ detergent powder which no one has ever seen….OMG!! Really Stupid!!
We can't eat chocolate without smearing it all in our face...Stupid but Still Sensible as Chocolates Brings Out The Child in us.
Celebs would come to inspect your toilet/ wardrobe/ plates/ toothpaste….really stupid!!
But The commercial of soft drink Sprite with tagline “Clear hai…” has a SMART concept.
Similarly pepperfry.com the furniture brand has  a Smart concept in its latest ad: “WHY WAIT FOR DIWALI" “An Idea can change your life”, “Walk when you talk” and “No Idea? Get idea”…is really has an innovative, smart and sensible content in it.
At last My most favorite Television Commercials  which I feel really has a very sensible concept in it.
One is The Nescafe Ad On Stammering Comedian That Teaches "Value of Persistence"
The Second one is Kinley mineral water that says "Truth Has Peace"
A well executed Television commercial has the power to make us experience all kinds of sentiments – laughter, sadness, inspirational, motivational… all in a matter of minutes. An art form in their own right, they showcase the latest trends in design, culture, music, changing trends and thoughts.
Though there are commercial which has other S like Sexism, Stunts and Sensationalism…but the thought is mostly around the above 3s….That how how feel about Television Commercials.
Stupid, Smart, Sensible or a combination of any two or all three. 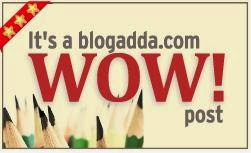 This post is featured in WOW-Write Over Weekend By Blogadda

This post is a part of Write Over the Weekend, an initiative for Indian Bloggers by BlogAdda.
Posted by Tina Acharya at 12:15 PM