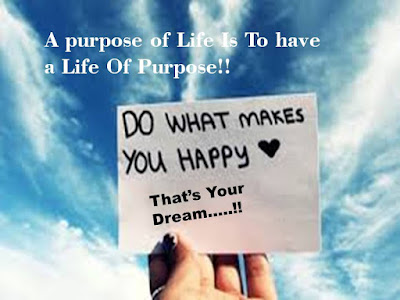 I really took time to understand my real dream. Sounds stupid…right!! But this is the fact. Till I understood what’s my dream is I was only misunderstanding the same till that day.
Having born in an orthodox family where the “wishes of girls are normally given less importance” everything appeared good to me became my dreams. That included dance, music sports or education. Some were fulfilled and some were not.

Some dreams came true after much struggle. I had to fight a lot with my own family members to fulfill my dream of acquiring higher educations. Some dreams never fulfilled like “dream to become a doctor or engineers”.

Then my dream to be a career woman fulfilled. But then remain as a career woman never fulfilled. What I mean to say is …there were so many “Yes and No” in the path of my dreams. I could never understand why things are happening that way. Why can’t I hold good things to remain in my life? Why every time I feel like I’m back to oblivion?? I used to wonder!!!

Few years back…when I had to take decision to quit my job, it really acted in a very negative way in my life. Initially with the thought of “Okay…it was a compulsion” I was pacifying myself but gradually it became insufficient. I felt like as if I’m a “lost identity” soul.

In my surrounding, it was nothing something new. So everybody said…it happens that way only. But inside me already there was a void. I was almost de- motivated and frustrated.
One fine morning…My door bell rang. As I opened the door…I saw a lady (around 60 years) smiling at me. She was my new neighbor shifted just before few days. I had the exchange of smiles with her; even I had asked her if she needed anything. They were elderly couple…after retirement; they had purchased the flat adjacent to mine.

I welcomed her and asked her to get inside and seat. Then I asked her if she would like to have tea….that’s how we sat together for the first time.

After a brief chit chat...I was surprised when she directly asked me
Tina…do you have any problem?? You can share with me.
No Aunty!! But why are you asking?

I can read through you…she said. Hum aise hi budhe nahin hue hai…she said in a very loving voice.
I didn’t say her anything that day. But gradually we became not just good neighbors but we became very good friends.

Aunty was very jovial. She had a life of that of a working woman...before her retirement. Her only daughter was settled in USA. Uncle was a gazette officer.

While talking with her, I don’t know when I shared everything to her.

One day she told me…you are with the wrong dreams. Actually not even dreams at all. You just wanted to acquire materialistic things for which you have always trailed the path which might not had a long way. Needs and dreams are two different things. Whatever you need, gradually it will come to you…but you have to find your dreams.You should find the Purpose of your life...something that gives you maximum pleasure. Something that defines your presence in this planet. That is your dream.

I felt very absurd. What the Hell…philosophical dialogues!!!But I didn’t say anything.

But she used to talk in that line only. After that I stopped discussing such topics whenever possible.

After several days I had to open the door as the bell rang. I saw a lady ( who looked as that of a slum dweller) with her two little children was inquiring about Aunty.
Aunty might have not been there at home.She would finish all her house works and would go out whenever it was possible. As i told her....the lady left.


In the evening, Aunty Came, I told her about the lady and her two children. Then curiously asked her “Who were they??”

I was surprised to know that part of the Auntie’s life. After retirement, she had started teaching underprivileged children in some slum areas. Not only that, she used to counsel many slum ladies about their health, parenting and other such women issues. She would also teach them about hygiene, cleanliness...etc.I mean she had her own way of living her life.
Later I came to know that she was a highly diabetic (insulin injection has to be taken daily), gone through “By-pass” surgery once and had severe knee pain problems. But I don’t know where she got that energy to travel and help whom she could help.

This piece of wisdom came from her…She made me realize what my dream should be.

I remembered...When I used to struggle to convince my family members to finance me for higher education, I always had a feeling that “There should be an organization which would help the students to have education”. Something which would not see any marks or score or family background but simply help them financially. I always wanted that. A student's wish to study whatever he/she wants to study should be fulfilled. there shouldn't be financial obstacle for it.

Perhaps for the first time I discovered “the real dream of mine” i.e. I want to help those who struggle to get education.
Looking at Aunty… I was so much inspired that I started teaching some students who couldn’t afford tuition that time.

But after few days…I had to shift to a different place. There it was not that possible. But whatever was possible with me I used to do that. I mean...helping out with books and other stationary if I found someone. Sometime I used to convince some other ladies to share and join me distributing things to those. I would help out clearing some lessons to my maid's children...etc. But i know these are not sufficient at all. I think many of us do the same. But a small part of my dream is getting fulfilled...I'm delighted for that.

I don't know if I can ever make an organization through which I can help those who struggle to get education...but

Aunty always says…whatever possible by you…does that. And keep doing and find out  something by which you can fulfill the purpose of your existence….!!
I mean nothing could be more to inspire me than this!!!
I was inspired to follow my dreams...since then!!!On the way only I have just found my passion for writing...but my dream is to have something to help those who struggle for education!!!


(I don’t know why people neglect old people!! They are so much experienced that we can really have all our problems solved if we have a “Wisdom Club” around us. Their experiences of life are indispensable! Everybody should realize that. They share their wisdom happily and free of cost but we perhaps don't know the preciousness)