Marriage are made in heaven but worked out here on earth: A Sachhi Advice by My Brother

I completely agree with the message in this video. No one advice you truly (#SachhiAdvice) the way a elder brother dose!!!


It’s more than a decade now. I would say, that was one of my worst times in terms of confusion, apprehensions and bewilderment. About a year back that time my family had started looking for an alliance for my marriage. My parents and my three elder brothers were whole and sole to take the decisions (obviously) as in arrange marriages, especially The Girl has “no-say” as the family takes the decisions.

That particular time one of my brothers had opened an account in www.bharatmatrimony.com. He was also handling the same on behalf of me. Many proposals had come. My brother was reviewing by checking the authenticity and truth about the guy and family. After that he would talk to them first to find what exactly they were looking for. Then he would sort out the most suitable one for our family and invite them to our house to meet in person.

Some prospective alliances had already visited our house also. They were supposed to give their decisions after a while. My family was determined to marry me off that year itself (to avoid any delay in my marriage) as the next two three years were inauspicious for me as per my horoscope (we are a family of astrologers).

Things were so much messy. I wanted to concentrate on my career. I had appeared for OAS exams (Odisha Administrative Services) and qualified in the prelims. The Main exams were supposed to be held after three months. I was in no mood to marry at all…let alone choose an alliance from the list.

That day I saw a mail from a person staying in Mumbai and working with Wipro. He had expressed his desire to go for the alliance. I ignored it thinking “just another proposal”. However two days later I heard my eldest brother was going to visit his family that was staying in a city around 200km away from our place.
When he returned, I heard elders talking and discussing that his family was looking for some handsome dowry. They were least concerned if the girl was educated or not, suitable for their son or not. Then I heard “the proposal was cancelled as my family was not interested for some dowry hungry people”.

Next day, my sister-in-law (Bhabi) asked me to talk to a person. As I took the receiver, it was the same person whose proposal had been cancelled on dowry ground. He tried to convince me that He wasn't interested for any dowry. In fact he never favors such nonsense things.   But his parents were like any other parents. He would manage them if I would give my consent to the proposal. I said “No”.

I don’t know what talk that guy had with my brothers. After two days. I heard he was visiting my house along with his parents.

It was exactly 2nd March 2003. They had come. All those “ladki dekh na ritual was going on”. However I was surprised that “my marriage had been fixed, dates had been set and venue had been decided…even before they saw me in person”.

After everything decided, they called me and my Bhabi gave me the news that my marriage was fixed for 12th March 2003.

Honestly…the ground shook from the beneath of my feet. I felt a total hollowness from within. After a while they left.

I started crying and objecting hard to the decision. Within 10 days my world was going to change and I would be in an unknown family and place. The thought itself was so scary that would give me a severe Goosebumps.

All were taking that as a normal thing as every girl is scared of before marriage especially in arrange marriages. 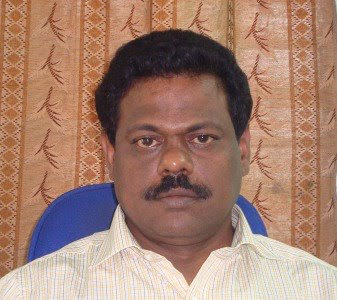 Next day, My Eldest Brother asked me to talk to him my mind. He wanted me to tell him all my apprehensions.
“I don’t like the guy, I don’t like his family, I don’t want to marry right now as I want to appear in my exams…..blah blah…And finally I’m not sure of the guy I’m going to marry as he is not convincing to me at all….I started emptying my mind and heart. Actually there were lot confusions in me.

The following were our conversation that day….

My Brother said, “If you don’t like it at all, I will  stand by you and respect your decision and being the eldest son…everybody “including parents” would support/abide by my decision. But if you want my advice…I would say go for this alliance”

I said, why? The guys’ family had already shown their colors. Even there were lots of inconsistencies in terms of talks from their side. How could you think that he is the right guy for me??

My Brother: See there is nothing called “Right guy” or “Wrong guy” or “right decision or wrong decision”. A decision is taken and then worked out to make it right. Marriages might be fixed in the heaven but they have to be worked out here on earth. You may marry any person, but the challenges would be same. There would always be something to be worked upon.

Before marriage life is like watching TV without any responsibility in the living room. But after marriage only you get into every corner of the house. That's the fact you marry anyone at any time.

Regarding this guy…I have seen a glimpse of conviction and honesty in him. Of course there are immaturity which are obvious of his age.

But he is trying hard to mange everything as per his capacity. So no matter how is his family, I have a feeling that he would take best care of you and we wouldn't worry for your life”
if your apprehensions are like "may something go wrong, then it is applicable to any guy you marry"

There was Nothing to say more. Even if I was not convinced that much but I had faith on my brother’s advice.After all true advice comes from the own people...you know.

Today I can proudly say that actually it was a Sachhi Advice from my brother as I’m with “the most right person” in the world! My brother was not wrong in judging him. I’m proud of my brother!!! He helped me take the most important decision of my life amidst apprehensions,anxiety and perplexity.

Still now I take his advice before doing anything new...as I have that faith on him that he would always give me true advice...#SachhiAdvice

I'm thankful to Almighty for blessing me such loving brothers in my life.

“I am participating in the #SachchiAdvice Contest by MaxLife in Association with BlogAdda.” 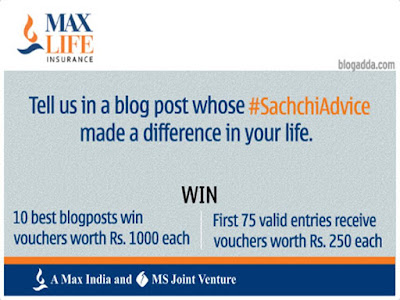