Ohh Father!!! Why didn’t I hug You tightly then? 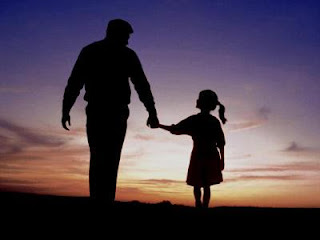 It is time you hugged your dad, don’t you think?

As I went through the details of this activity and finally landed with the above question, honestly I didn’t remember any instance when I really had hugged my father.  Actually I never had such an upbringing where a father almost shares most of the activities while nurturing a child.Changing diapers or having the baby a birth...were quite uncommon those days I think.

My family was like that of Simran’s family (Kajal) in DDLJ. Father was a bit Amrish Puri kind ultimately deciding person while mother was like that of charming Farida Jalal. The only difference was there were sons in the family.

Father was a self made person had a very struggling and humble past. He had stood himself with his own effort in life with a prestigious job under state government. No wonder why he was a strict disciplined person, bit stubborn and inflexible. 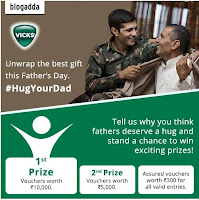 In our family we were close to our mother. Father was never cuddling or squeezing type towards his children. Actually the truth is those days in my area ( a small town in some part of the Odisha) the whole concept parenting more or less was like that only.

So there was always that invisible distance between me and my father. However one particular thing about my father, he was lenient towards his daughters (me and my sister). So As a daughter, I never had to follow some of the strict things that were mandatory to my brothers.

But his leniency could never narrow that invisible gap. In fact we never had that thought of hugging our father at all. With passage of time many things changed. We all grew up, Got educated and then set for our lives.

My mother says, I was a wish child of my father. Before my birth my parents had Three sons. So when I was conceived to my mother, the first thing my father had said “this time I wish a daughter”.

Ours is an orthodox, ancestral and medieval kind Brahmin family. The girl child was never wished for... those days(No wonder...). My father might be the first person in his family (perhaps even in his generation)  who had wished for a daughter. Moreover he had also followed some rituals that were meant to have a female child irrespective of resistance from my grandma.

In short...he was bit soft to his daughters. But In spite of all these, we never had those cozy moments of hugging. There were many occasions in which had it been a normal upbringing I would have hugged my father so many times…I feel.

Even when I got married I never had that impulse for hugging my father at the time of "Bidaii" though I hugged everyone else…while literally broken with weeping.

I became a mother and got busy with my life. Most of my interactions with my parents were through phone only. I used to visit home with my son and husband few times in a year. Those were so busy days that I hardly thought of hugging my father though my mother used to tightly hug me and cry every time on my return.But my father used to be with his signature calmness and quite just keeping his blessing hand on my head.

I really don’t remember anything special about that day. In the afternoon I got a call from my elder brother. As I heard him…I was simply dumbstruck!!

My father was no more in this physical world. A mild heart attack was enough to stop the functioning of his already frail and fragile body.

As I heard that…I don’t know when I had climbed up the chair to fetch the hanging frame that has the photograph of my parents and tightly hugged it closed to my chest and was completely lost in heart throbbing pain with over flowing teary eyes.

I was feeling like hugging my father tightly, not letting him to leave this world, me and entire us. Suddenly a void was already created inside me and I was deeply afraid to feel that void, face that emptiness and accept that reality …it was really horrible.I needed his help to face that reality...
Every time it was He who had helped me sail through the most difficult times of life easily...but I never knew when the most hard time would struck me (his absence) he wouldn't be there....

I think that was the time I hugged my father…the already departed soul.

I still live with that void. It is pinching. you can never imagine the worth of those moment till you lose them completely... After that I realized how many times I had missed out giving that tight hug to my father…Father, did you feel my hug that day…?

As a little girl once I had a fall, hurt and bled,
My father picked me into his robust hands
And all those pains shed
Why didn’t I hug Him tightly then..?

As an adolescent when I was low
With viral fever and catching cold
It was He who had that Vicks in his hand
Some of it to massage on my chest
And To rub on my aching back
Patting my head, he had said
“Now you’ll be alright dear”
And let me sleep and enter into my dream land
Why didn’t I hug him tightly then..?

As a teenager how adamant I was
To learn to drive his scooter
The only automobile He had
I fall and wounded myself
And dropped the idea to drive at all
It was he who made me believe
That it is the fall that tutors you to rise
It is the fall that makes you strong to stand
Why didn’t I hug him tightly then? 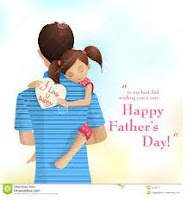 As a girl in her late teens
My demand for a scooty was fulfilled by his sweat money
When the world was not having that confidence
That I can drive having someone in the back seat,
It was He who had that believe on me
And I found Him sitting on the back
And asking me to give a ride
Why didn’t I hug him tightly then??

Everyone around me had gone wild

Praying for me to be safe and secure...
It was He who had that calmness gesture
Saying me “Nothing will happen to you my dear”
And all my fear and acute pain disappear
Why didn’t I hug him tightly then??

There are many more occasions where I could have given that “Tightly Hug” to my father. He is still a constant source of strength in my life. He was a self practiced Astrologer (quite common in every Brahmin priest family). He had told me once that none could do any harm to me and nothing would ever stop me what I want to achieve. Still I get strength from those words.He still lives in me...

We must show our love and affection to our fathers before it gets too late. Father is indispensable in life. You never know how it feels when u see the empty chairs and garlanded photos….ask someone who lost his/her father…!!

There is no right time to give that “Tight hug to your father”. It is never too late also…just don’t make it too late…Go and Give your father that “Tight Hug, its the perfect time”

“This father’s day, I am expressing my love towards my dad by participating in the #HugYourDad activity at BlogAdda in association with Vicks.”