I am a woman, but I never felt "Despite Being a Woman" as a Sexist or derogatory Remark or a worst compliment Ever!! 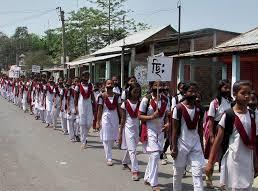 Having said the above words PM Narendra Modi wouldn’t have ever thought that he would
Raise the eyebrows worldwide and possibly might get literally trolled and chided in social media where he actually has a big support...Let’s forget about the other media platforms?

During his recent Bangladesh visit PM Narendra Modi with his great oratory skills, while making out a profound speech used the phrase "Despite Being a Woman" to eulogize and extol his Bangladeshi counterpart Sheikh Hasina on her resolve to counter terrorism.

Honestly I was quite stunned when the phrase "Despite being a woman" acquired a centre stage in Media that include all (print, electronic and social) few days back.

I'm not here to defend PM Narendra Modi because I think as an aspiring world leader he should better be careful on his choice of words especially while on an International podium. I mean the above sentence could have been much better had he said: "I am inspired with the audacity of Bangladesh PM on her zero tolerance to Terrorism"….for Example.

I mean he should have said something without mentioning the gender of his Female counter part. I think the speech writer of our prime minister should take a note of this for future vocalizations.

However what surprised me "Despite being a woman" is now termed as a stinking phrase that dispenses the underlining sexist, misogynist and male chauvinistic narrow-mindedness in the subconscious minds of our male counter parts or society.

If it is so, then why I never learnt to take offence from it? Believe me, I can't count how many times I have been referred with the above phrase so far in life…and you know what… every time I thought it was a bit of appreciation for me.

Let me mention few personal instances where I have been mentioned with the above remark. During my school days I used to be a very active child. Along with studies, I used to perform very well in all other activities of the school. In our classroom or in assembly, so many times my teachers and my Principal had said: "Despite being a girl, she is outperforming other students in the class as well as in the school."
OMG! Were they actually insulting me for my gender? I never thought like that because I felt it was their appreciations for me….was I wrong!!!

During college days also every time I was mentioned with the above idiom "despite being a woman (girl)" with my every achievement, be it college quiz competition, debate, story writing etc. And every time I was quite motivated with the admiration. Should I have taken it as insulting?

Once my HOD (Head of the Department) even said it in little exaggerated way before the external examiner who was supposed to take our practical exams. When the examiner was supposed to ask me viva questions, my HOD said, "Despite being a girl (woman) she can beat anyone in Badminton" while referring my recently won Badminton Championship in college, to him. And guess what…I topped the practical marks while no serious question was asked to me.

Probably the examiner was more impressed with my badminton achievements like that of my HOD. And you know what, I actually felt flattered with what my HOD said. But never thought, "Was he dispensing something reeking sexism in his words?"

Let’s come to some general illustrations. Now, what about those myriad instances where we have been taught that "despite being a woman" Rani Laxmi Bai had given nightmares to British administrations, Madam Curie got Nobel Prize in Physics etc? Were they teaching us through utter misogynist mentions?
And recently Malala Yousufzai, who fought against her assaulter who was opposing girl's education, was mentioned with the above phrase numerous times! Were they all sexist quotes?

What about Shakti Mohan and Rajasmita Kar for whom the same phrase was used when they emerged as winners in the TV reality dance show, Dance India Dance. Were those mentions meant that women cannot dance??

Few months there was news of Meerut Woman Pinky who fought with goons in a UP street alone to save her husband. Wasn’t it something like “despite being a woman she outdistance the goons” kind matter in it? Was it a sexist mention??

On a different note, I have heard Anup Soni on several occasions, making the above remark while reporting a Crime committed by a woman in Crime Petrol, Sony Tv. For example “Ek Mahila Hone ke Babjud itna vayanak hatya kaise kar shakti hai? (Despite being a woman how could she commit such a violent crime??)

Now in the above sentence doesn’t it mean that women in general are less likely to commit vicious crimes? So was it appreciations or sexist mentions???

Recently the results for various board examinations were out. Many news papers, online platforms came out with a head line "Girls out shine boys". Doesn't it sound something like "despite being girls, they outshone boys"?

OMG! Were they actually denigrating girls' performances while offensive of their gender with classic chauvinism? Then there should have been a national outcry on it…Right! But I don’t think anything happened like that.

Even for Congress President Sonia Gandhi the above remark was so many times used to glorify her for heading the oldest political party of India. Let’s not discuss How Late PM Indira Gandhi was mentioned with above remark…in fact some time as the only “Man” in her cabinet or Dr. Kiran Bedi despite being a woman, she became an IPS officer.

(I really wonder why despite being the leading nation of the world, why USA never had a woman president so far!)

Worst Complement? I mean if not insult or sexism…then it should be worst complement? Does it mean that during all these years whenever the above phrase was used to compliment women, it was actually a worst complement for them? Honestly…it makes me feel a bit of cynicism at all time high.

“Despite being a woman” was a group of words perhaps were coined to appreciate those women who despite being in a men’s world had outclass them (men). It was always mentioned in a context where women have proved their potency where they were less expected.
.
Yes…I agree while being an appreciating phrase for the women's achievements, it also reflects how time and again womenfolk had been made to suffer by the society for being a woman. They were traditionally discriminated for their legitimate rights. It just goes like "when people say you look younger than your age…they also mention your right age as well."

"Despite being a women" always reflected the truth of stinking side of the society with fetid sexism and discrimination against the fairer sex but it was never been a derogatory, sexist or worst complement kind remark to any woman so far…I feel.

At Last, had it not been Narendra Modi, the scenario would have been different…I guess. 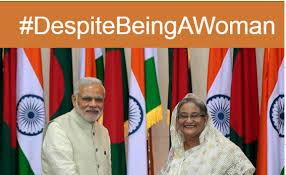