#SpreadTheVibe: Become a Help to someone else when You are most Helpless!!! 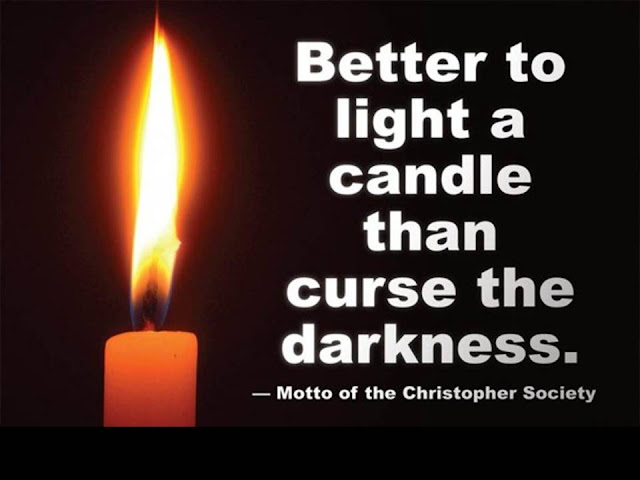 "It is better to light a candle than to curse the darkness." 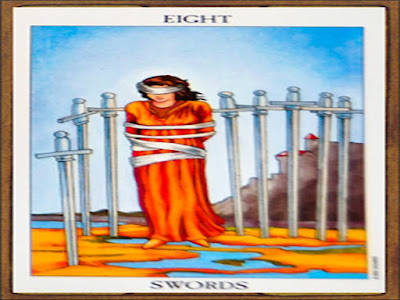 Well, I’m neither a tarot card reader nor have any inclination towards any kind of occult science. However the tarot cards especially the pictures in them often fascinate me a lot.
The above picture is called as “Eight of Swords” that - I feel - symbolizes the reality of most women in our country. It shows a woman tied up, blindfolded and surrounded by swords that act as a kind of prison or enclosure.

Ever since a girl is born (even it happens only if she is really fortunate enough to come out of the womb and witness the glimpse of sunlight on the earth) she is tied up by age old traditions, prejudices and all those patriarchal clutches reign in the society. Before she is able to view her world through her own eyes, she is blindfolded with all those “dos and don’ts” and asked by everybody in her surrounding to “see” what others want her “to see”. At a point when she realizes that she is an individual and can have her own thoughts and identity and has every right to chase her dream, she discovers the shackles surrounding her in terms of “family deliverable, criticisms, fears of assault by hungry sharks, sometime her own health constraints (due to eternal negligence)…and the list goes on”.

In short it seems as if she has been enslaved without her consent, in fact without her notice. To her it appears, there is no possibility of escape as she finds herself standing isolated and alone in the midst of bleak and inhospitable surroundings far from the town (read a “a positive hope”) in the distance. The sky is grey and gloomy, indicating despair and hopelessness. At that moment robbed of with all her energy to fight a battle for herself she often left with only choice… “Give up and accept the destiny”.
Option less… Right!!
Isn’t it the harsh reality of women (baring few privileged) in our society??
Well...Let’s again have a deep look into the picture. We can see that “her feet are not tied up”.
That means even if she is blindfolded, hands tied up, swords restricting her…her feet are free to get out of that. In simple words…even it seems to be impossible to come out the manacles of injustice and chauvinism…there is actually a way out exist in reality for every woman. While Most women are not able to make out it but few not only see it but they walk out through it.  They are the “ones” who become “inspiring” for others to #SpreadTheVibe to follow.
Here is an inspiring story of such women “Mrs.Shanti Mishra” which will leave you enthralled and awestruck.

When I met her for the first time I was quite impressed by the gorgeous smile she carries every time on her face. Though she is 62, her charm and magnetism in her personality is something that will amaze you.
She is an active human activist for women rights, a social worker working for protection of women and child welfare in association with ISWO (Indira Social and Welfare Organization) – an NGO -  and an esteem member of CWC (Child WelfareCommittee) and many more….I will mention them in the course of writing.

Her personality is actually quite deceptive. No one would ever believe that she in reality had a very thorny and helpless path to trail before coming to a position at present where “She is the HOPE” for many.

She was born to an educated Middle class family in Dhenkanal, Odisha. Her parents were liberal and believed in Educating girls. She did her Masters in Philosophy from Vani Bihar, Utkal University. At that time she was the heart throb of the college as she was damn beautiful with an exceptional brain.

She was willing to join Civil Services which would have been easy those days for girls like her. But destiny had other plans…bit cruel one.

She was married to an IITian Engineer (an alumnus of IIT Kanpur) well placed in Mumbai in late 70s. She was convinced by her father and father in Law (who were friends) that life would be easy. Believing on them almost blind folded she traveled to Mumbai in search of “Easy Life” for her.

After she became mother of three…life started taking turns. Her Husband left the job and return to his native place in an ambition to do something of his own which he could never succeed.
Life at her “in laws” place which was a “Baa Bahu aur Beti (Read “Joint Family”) kind was something more than what the “protagonist” face in any Ekta Kapoor serials.  As her daughter says “My Mother lived in a HELL or real HELL might be a better place than where she had to spent most of productive time of her life”. There were conflicts, criticisms, unnecessary accusations and unfair allegations…etc. Typical Indian In laws family.  She was the one who had to face all such things in spite of doing all the household works all alone without giving due care to her children and herself which she sometime regrets these days. There were some merciless times when she wasn’t even able to visit her Parents and family at least once/twice a month who were staying in the same streets as her in laws do …some 50 meters away.

However even in the midst of stress both physical and mental, she had joined an NGO those days out of her passion for which she was dedicating at least one hour a week. But that too didn’t go well with some of the family members at her in laws place. So there was no option for her than to leave it and get confined into the four walls of her house. Those were days when she was totally cut off from the outer world.

Life was tough as there was no support for her in terms of finance, moral and emotional. Her kids also suffered in terms of education and nutrition. But she was helpless. The tensions gradually took a toll on her health as it started deteriorating with all those health ailments like rheumatoid arthritis at an age of 35.

However in year 2000 her children who were grownups by then forced her to Join ISWO – The NGO established in 1989 – that was initially a “distraction” for her from her difficult life at home.  But it became something “Life changing” for not only her but also for those who are having similar or even more gruesome fates. 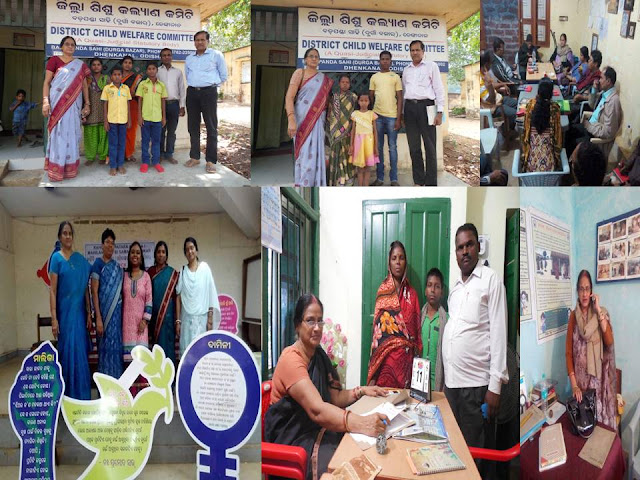 She was just a volunteer in the beginning but gradually became a Human Right Activist especially for women. She traveled all over India for conferences and workshops. With all her effort she could manage to open a Cell for women called “Surakshya Mahila Prakosta” at the Dhenkanal SP Office to work in co-ordination with Police to deal with the problems (including domestic violence, dowry harassment, social harassment, violence against women and assaults)  faced by women. She is at present an active member of District Legal Service Authority of Dhenkanal and also Sexual Harassment Committee in District Court (Dhenkanal) and Postal Division (Dhenkanal).
.

In year 2014, because of her selfless involvement with all these works lead her to be nominated as an esteemed member of of Child Welfare Committee(CWC)– a quasi judicial body for care and protection of children of Dhenkanal District branch.

She had a special interest to study Law which she couldn’t. But while her involvement in social work she also read the law books and understood that “at a position when nothing is with a woman, there still remains the Constitutional rights with her which is sufficient to live a Life of Dignity”. To create and spread awareness of “law and constitutional rights for women” among women and their families she also has translated a Book in Odia language “Mahila Samparkita Aaieen Sachetanata Pustika” originally written by M.A Banaja and Advocate Shyamasundari. She was also awarded as the “Defender of Child Right” By CLAP (Committee for Legal Aid to Poor), Cuttack, Odisha.

One would find numerous stories that she encountered while visiting the rural areas of India. She says. “There are some places where people still leave in dark ages”. Horrible! She is determined to spread awareness there and help them to come out of obscurity. 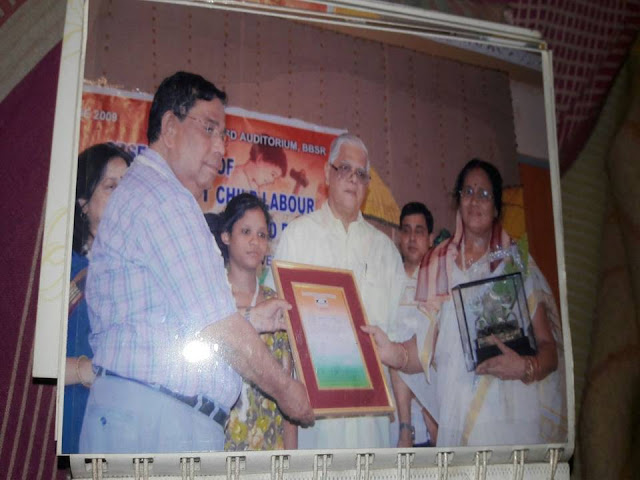 However looking at her dedication, selflessness, enthusiasm and commitments it seems…it’s just the beginning of her recognition.
When I asked her what drives her from inside to get involved in these works when she suffers all the health ailments …her reply was “it was the expectations and hopeful eyes of needy and deprived” that gives her energy to walk out and do her best to help them.
She says…In the moment of helplessness and weakness, one should become the “Strength and Help” of someone who is more depressed”. That’s the best way to gain strength for you.

I asked her what “happiness means to her” to which she shared lighthearted tale.
Once when her two year old Granddaughter had visited her place, her Grandpa (who is very fond of tea) said “When my little angel will learn making tea for me” (we know how our society is obsessed to make girls learn cooking and other household works) to which she immediately replied on behalf of her Granddaughter that “she will not learn “making tea” but will learn something “how to enjoy a Cup of Tea” made for her by others. 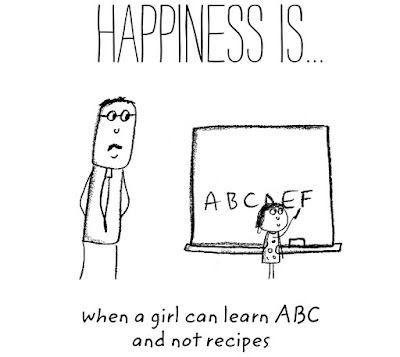 Her sole message to all the women out there is. “To urge the women; to discover their potential, regain their self-confidence and stand firm for their conviction and rights.  To break the culture of silence and speak out the injustice they suffer and find ways and means to set them right, become the voice of voiceless speaking for others so that they can be instrumental for transformation in the society. It’s the need of the hour”.
"It is better to light a candle than to curse the darkness."

I mean isn’t it amazing. I am inspired by her. Dear friends…I’m really delighted to share this story.
#EveryWomanIsALeader in her own way. It is essential for her to recognize her worth and importance. Then she can really #SpreadTheVibe and ignite the minds of others to live a LIFE OF DIGNITY.

Remember even if her hands are tied up, she is blindfolded and swords are there to restrict her, her feet are always free to “walk out” if she wishes…!!

#SpreadTheVibe because all the good in the world needs to be talked about. 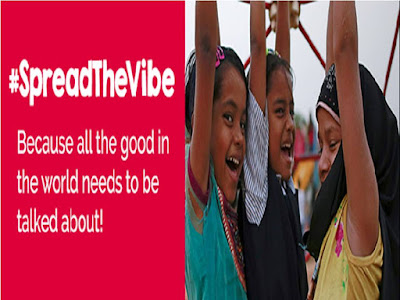 I shared this story for #SpreadTheVibe campaign of Youth Ki Awaaz  a Platform that gives voice to many unspoken stories in association with Indiblogger.

Click the link  http://www.youthkiawaaz.com/ to know more about this.