Goddess Durga: The Feminine Supreme Being!!! 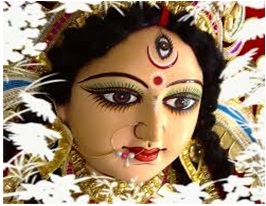 Durga - The goddess of power and strength, is a multi-dimensional deity, with many names, personas, and facets.
As Mahishasuramardini or Shakti, she is the destroyer of evil - with her ten mighty arms carrying lethal weapons she triumphantly slays the demon Mahishasura.
As Parvati, she is serene
She is Bhawani, symbol of life
She is Sati, the object of death.
She is Basanti, the herald of springtime.
Durga, with all her forms, encompasses the essence of salvation and sacrifice.
She is the mother of bounty and wealth, as also of beauty and knowledge,
She is the embodiment of purity, knowledge, truth and self-realization.
Goddess Durga represents the power of the “Supreme Being” that preserves moral order and righteousness in the universe.
She is the energy aspect of the Lords
Goddess Durga is the inherent dynamic energy through which supreme consciousness manifests itself.
In Short, Goddess Durga is “The Feminine Supreme Being”
The Perfect Woman Ever Created in entire COSMOS!!!

Embellished with the striking BEAUTY
And adorned with the ELEGANCE, POISED and BIOYANCY,
She is the epitome of Divine INTELLIGENCE;
In every mortal being we witness her PRESENCE
She is the manifestation of VALOUR and JUSTNESS,
TRIUMP over VICE being her celestial message
For when The EVIL raises its ugly head,
Her SACRED WEAPON flings to make it behead
The subtle and sweet FEMININE GRACE of her
Falls on humans as blessings of LOVE and CARE
As she steps in, her CHARMS Brings an ILLUMINATION
An aura of FESTIVITY, POSITIVITY and CELEBRATION
For all the ATTRIBUTES of a “Perfect Woman”
Have their abodes in her inner-self
She is the One and only “The Perfect Woman”
Ever Created On The Earth and in entire Universe!!!

‘This post is a part of Write Over the Weekend, an initiative for Indian Bloggers by BlogAdda.’